The Underlying Assumption That's Necessary For Every Star Trek Mission by Ria Misra
Thursday December 25th, 2014 at 1:19 AM 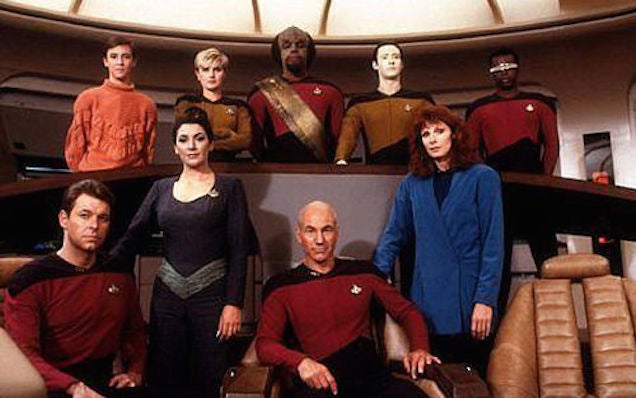 There are a lot of things you have to simply accept (like teleporters and faster than light travel) in the Star Trek universe. But there's also an underlying assumption in the show that has less to do with technology and more to do with its characters — and it's been hiding in plain sight the entire time.

The Rise and Fall of the Midnight Ghost Shows by Matt Novak on Paleofuture, shared by Lauren Davis to io9
Sunday November 3rd, 2013 at 1:01 PM

Throughout the 1930s and '40s, Americans flocked to their local movie theaters to be scared out of their wits. Sure, they loved the classic movies of the time like Frankenstein, Dracula and The Mummy. But it was the terrifying and humorous stage shows—known generically as the Midnight Ghost Show—that really packed the theaters to capacity.

A couple of weeks ago, I was taking pictures in Union Square for my article on The Warriors filming locations, when I happened to pass by these six crumbling columns on the mezzanine level near the 4-5-6 train. Now, I’ve walked by these things a zillion times in my travels across New York City, but it suddenly occurred to me that I’d never actually stopped to look at them. I’ve always just assumed them to be remnants from the old Union Square station, one of New York City’s original 28 subway stations, and it turns out that this is correct. Dating to the Union Square of 1904, the station’s walls were once adorned with these fantastic terracotta eagles, along with some beautiful mosaic work: The walls were uncovered and saved during one of Union Square’s many renovations, and installed as an art installation by Mary Miss in 1998. I love how the innards of the walls have been included in the display… The wall portions are arranged so that they steadily deterioriate… …perhaps signifying the death of the old Union Square? What I didn’t know about are the red frames. See, as it turns out, the wall portions are just a small part of Miss’s installation. In fact, there are dozens of relics from the old Union Square strewn all over the station, all of which can be found enclosed by a red frame. And once you start looking for them, you’ll suddenly see them everywhere. For example, I never thought twice about this Broadway Line directional arrow – but looking at it again, I now realize how incongruous its design is to the rest of the station. In addition to the mosaic Broadway text, note how the surrounding white tiling is in the old square style, while an additional mosaic strip runs along the top – all stopping abruptly at the red border. Ditto this great old “Exit To Street sign.” Again, I’ve noticed it countless times before, but never stopped to consider how out of place what’s within the red frame is to what’s outside. In a way, each is literally like a window into the past: Wandering around Union Square, I started finding red frames in more places than just the walls. Here’s a column you’d never think twice above – but wait! There are those red frames, and between them, we find a white-tiled column topped by a tiled stripe, an all but extinct creature in modern Union Square: Here’s another red frame, one of my favorites, again highlighting not only the mosaic stripe along the top, but the difference in the old white wall tiling vs. new (and is that authentic old-fashioned New York City grime?): Along one of the connecting passages… It gets even crazier, as the red frames turn up in the most unexpected of places. Here’s one looking down from the mezzanine above the 4-5-6 train… …and if you look in at the right angle, you’ll see it’s highlighting “steel-bulb angle columns.” In the corridor running north toward the 17th Street entrance, there are a bunch of slits cut into the wall… …which offer a slightly more abstract window into Union Square: For example, a tangle of telephone wiring: I’m sure this is old news to a lot of you. But for anyone else like myself who’s been to Union Square a million times and never stopped to look, learning about the red frames is an eye-opening experience, as you suddenly realize you’re basically surrounded by a museum exhibit for the Union Square of old. Ha, and all this time, I just assumed there was a fire extinguisher on the other side of that red frame. Whoa, cool! I had no idea.
Brooklyn, NY Our friends at Meltdown Comics in Los Angeles are now selling this excellent Batman/Bauhaus women's t-shirt by Junk Food Clothing. Meltdown tells me that a men's version is coming soon. These aren't on the Meltdown site so you'll have to contact them to grab one. (via @meltdowncomics on Instagram)

How Netflix’s ARRESTED DEVELOPMENT Could Change TV Forever by Devin Faraci
Thursday March 28th, 2013 at 1:23 AM

The resurrected series could be the next step in episodic storytelling. Control-Alt-Hack is a tremendously fun, hacker-themed strategy card game that uses the mechanic of the classic Steve Jackson Ninja Burger game. It comes out of the University of Washington Computer Security and Privacy Research Lab, and features extremely entertaining and funny computer-security-themed scenarios, buffs, attacks and characters.

The gameplay is very well-thought-through (here's a PDF of the rules). Three of us sat down to play it this weekend with only a cursory glance at the rules beforehand. By following the quickstart instructions, we were able to jump straight into play, and within a few turns, we really had the rhythm and were busily sabotaging one another and cursing at the dice when they rolled against our favor.

Based on my play session, I'm really impressed. Though one player led the game early on, there were several reversals, wherein the leading and trailing players traded places -- always the mark of a great game. There was a good mix of skill, strategy and luck, and things were just complicated enough that it absorbed our full attention, without lagging or flagging.

A full game takes about an hour, and between three and six people can play at once. We played it after Sunday brunch and it was a great digestive aid. All three of us loved the geeky, info-sec-y references, the funny scenarios (everything from devising a cryptographic protocol for implanted medical devices to pranking a labmate with a gag WiFi keystroke-inserter), and the grace-notes (like a scenario that is encoded as a cryptogram). There were moments of unlikely hail-mary-heroism, crushing defeat, and lots of laughs. We'll play this one again.

reconbot
reply
Probably, but it might make me really mad. I'd rather throw a hack eachothers computers party.
New York City

opheliasdaisies
The board game could be the warm-up. Followed by Uplink.

opheliasdaisies
reply
Something to pick up for the next board game night?
NYC

stsquad
reply
One for the board game players.
Cambridge, UK
Next Page of Stories